Would you like to switch to the accessible version of this site?

Don't need the accessible version of this site?

Dr. Haught is a native of Washington County, graduating from 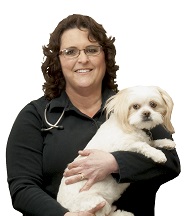 Frontier High School in 1986. She attended The Ohio State University from 1986 through 1993, receiving a BS in Animal Science with Honors in 1990 and a Doctor of Veterinary Medicine in 1993. Upon graduation she returned to Washington County to start her family and her career. She was privileged to work as a young veterinarian under the mentorship of Dr. David Spindler at Green Meadow Veterinary Hospital from 1993 until the fall of 1999. She then, with the partnership of her electrical engineer husband, Brian, pursued her dream of building and opening a new veterinary hospital - Colegate Woods Veterinary Hospital. Dr. Haught practices mostly small animal medicine, but does still see current equine and camelids patients. She lives with her family near Marietta. Two children complete the human side of the family; Daniel and Rebekah. There are three dogs in the family; a Shih-poo named Max who accompanies his mom to work most days, a Beagle, Grover, that was rescued from the Humane Society, and a rescued Golden Retriever named Bella. There are also eight cats at home, all of which were rescues. Three of the cats were from bottle raised litters of Colegate Woods - Squeaker, Getty, and Petunia. Addie, Skully, and Rue were rescued for various reasons while patients at the office. Rabbit the Cat, once a stray, rules the outside domain of the Haught house. Two horses round out the family - Shadow and Lucky. Dr. Haught enjoys spending time with her family and friends for fun. Her hobbies include reading, cooking/baking, playing the piano and enjoying the great outdoors. 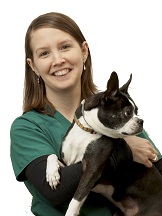 Christina started at Colegate Woods in the fall of 2001 as a kennel assistant. After graduating from Frontier High School in 2003, she attended Columbus State Community College for the Veterinary Technician degree. She returned to Colegate Woods in June of 2006 as a registered Veterinary Technician. Her family includes her husband Kyle, son Cooper, twins Mason and Scarlett, as well as 3 dogs, 2 cats and some fish. Maddie is a rescued Boston Terrier from Columbus, and Gulliver is a hyper lab. Peanut was one of our bottle raised kittens several years ago and Fender was found in the woods as a kitten by the clinic a few years ago. Ruger, a miniature schnauzer that was delivered via c-section by Dr Haught. The fish are a fun hobby. 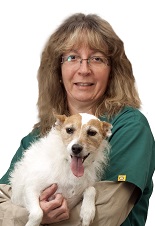 Brenda lives in the New Matamoras area with her husband Gary. Her oldest son, Todd, lives nearby with his wife Kayla and their two daughters Piper and Brielle. Her younger son, Eric also lives nearby with his girlfriend Savannah and their son Jackson. Brenda graduated from Frontier High School and Washington State Community College with a degree in Office Administration. In her spare time, she enjoys scrap booking, hiking, reading, working on a variety of crafts, being outdoors and spending time with family and friends. Her pets include Riley, a Parsons Russell terrier, Chance, a beagle mix, Toots, a Walker Coonhound, Case, a Red Heeler, and Hatchet, a beagle. Her pets also include Bob and Jay, 2 cats that Brenda brought home from work as kittens. Brenda has been at Colegate Woods since May 2000 and has enjoyed being a part of the Colegate Woods family.

PJ started at Colegate Woods in August of 2008 after a phone call from Brenda. Her job includes everything and she is the mom of the workplace whether being a hug or a kick in the butt! She is married to her husband Scott and has a boxer named Charlie that PJ and Scott adopted after she was very sick with parvo and needed a home. They have 3 cats, 2 of which were rescues from the office as well, Tober and Lilly, as well as 3 horses that they enjoy having.

Dee is a “part-timer” who started in January 2011. Her pride and joy are grandsons James and John. In her spare time, Dee enjoys crafting. 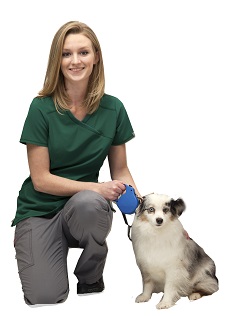 Jessie started working at Colegate Woods in the Fall on 2015 after moving to the area (from Southern WV) with her husband, Corey. She is a recent graduate of WVU with a Bachelors degree in Large Animal Nutrition and Agriculture. Her animals include 2 dogs, who live with her, Bella and Brutus. She also has 3 cats and 3 horses that currently live on her mom's farm. 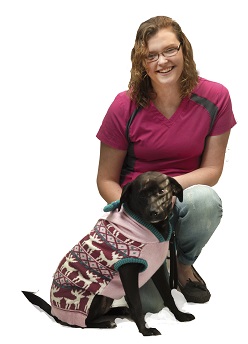 Jessica started working Fall of 2014 after job shadowing that year. She has 2 cats, Sher and Oscar, that she adopted from the clinic, and a dog named Petey.

Kathy retired from Ohio State University Extension. She and her husband Mike have three dogs - Marlee, Maddie, and Kaitlyn - and two kittens, Micah and Katie.

Becca works on her family's farm. She has a collie mix named Franky and a black lab named Martha.

Skyler is a freshman in college and still deciding on his major. He has a golden retriever named Gunner.

Find us on the map